'Paint By John'                                                        story of John Moschioni
For a long time, now, I have known that I lived and experienced what became a small historical window in American culture. I didn't know how to do everything, but to the best of my knowledge, I was the only guy in the Southwestern United States that could do the van inside and outside too. I was an artist from the time I was a small child. At the time I stepped into painting the vans... there were very few of the painters who had artistic skills so the companies would pay us a small fortune so they would not lose us. I wasn't in a van club. .. but I did build them and painted them for a full time living. At the time, I felt like it was the coolest job I could have.

Here's an example (circa '77) of the custom van painting free-hand airbrush work by Alton Gillespie.  He was what I would call in the top 2% of custom van painters of the time. He was a Dallas-Fort Worth area van painter.

In the mid 1970's, I got a job building the interiors at Custom Van, Ltd. in Dallas, TX. Because of some minimalistic art/ painting skills that I had, I moved over to the paint shop and started painting them. Moving into the decade of the 1980's, I opened my first business (at 27 years old) in Houston, Texas... called Paint By John. The paint jobs evolved. What was going on in the early seventies changed. The late seventies had a whole different look. I didn't paint until around 1976. Of course, by 1983, this type of work was a thing of the past (the Saudi Arabian oil embargo of 1979 spiraled the custom van business downward and long gas lines were a daily norm-darn gas hogs!). This particular paint job is what the customer (Gulf Coast Dodge) wanted me to do. I'm on the left and my cousin, AL, is on the right. The two of us painted this thing. I had a ton of fun in the custom van business and it provided me with an opportunity to learn so many, many thing$. It was a blast.. and the painting work paid quite well too. 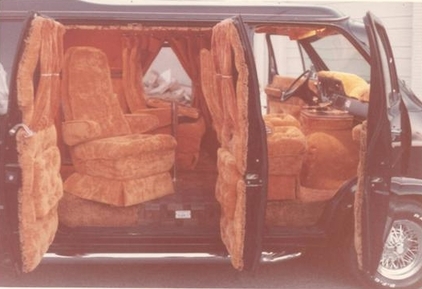 Before I started painting them, I was building them. Here is a side view looking inside. This pic is from around 1976. I was one of many youngsters on an assembly line. I could do everything inside that van except upholster the "Captains chairs" and sew the curtains. I knew how to install everything on the interior and exterior. Carpet the floor, build the bar and the back bed, build the door panels and upholster them, do the headliner, dash board, engine cover, install seat bases (with or without drilling into the break lines below the floor), install an extended higher roof on the entire van, on and on. Roof racks, ladder, running boards, cut the holes for all the different types of windows. It is possible that I was one of the few (in the whole country) that knew how to do the inside of the van and put a nice paint job on the thing too. In the way of mass production, Custom Van Ltd. had the finest product in the entire state of Texas. I was very proud to work for them and I helped to maintain a standard that all of us could be proud of. In 1976, a new car dealer was paying about $3800 for that entire interior including a nice paint job on the outside. Blows my mind! I made about $4.50 per hour as an interior builder. The custom van biz did a majority collapse in 1979. 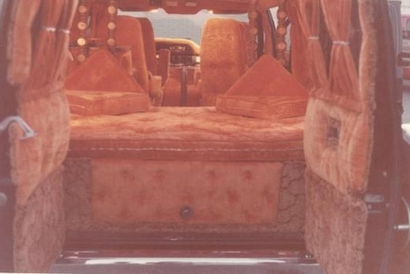 This is a view through the back of the van. You can see a bed, storage under the bed, door panels, curtains, diamond pillows, captain chairs, door panels with carpet on them. The orange fabric was sort of a crushed velvet kind of thing. In the very front of the van, you can see an overhead console.. it would have a little electronic clock, maybe a radio, or fuzz buster or whatever. Although these were custom vans, they were not what I would call "true custom" because, most of the time, they were not one of a kind. The vans were mass produced on an assembly line as different models. Custom Van Ltd. (in Dallas, TX.) did most of the work wholesale for new car dealerships. The company was started by Kelly O'Brien and his son Tommy O'Brien. They were, originally, from the Chicago area but moved to the Dallas area and, then got into the van business. They started the company in their single car garage in their home when Tommy was about 15 years old. Once the company moved and left the Grove area in East Dallas and moved on to Perimeter Drive... it became very large.

I really put my heart into that business and I worked very, very hard. Eventually, the business just faded away, mostly, because the insurance companies wouldn't insure the big murals any longer.. Those big murals on vans were a small window in American culture.. it was really cookin' from about 1975-1980. The custom painting of automobiles is an original American art form that evolved out of the West Coast and made its way across the country and to the world.....
"Another area company was 'Classic Van Manufacturing' ran by D.J.Williams. He started in Mansfield Tx in the early 70s. Biggest mfg back in the day. He had a very fine mass production product and most of his employee that built that product came from Custom Van Ltd.  Classic Vans in Mansfield was his lower end van. The company in Arlington which started around 1977-78 was called Diplomat Vans. This is the company which was D.J.'s much higher end line of custom van. It was a wilder product.. Classic Vans was a bit more conservative".